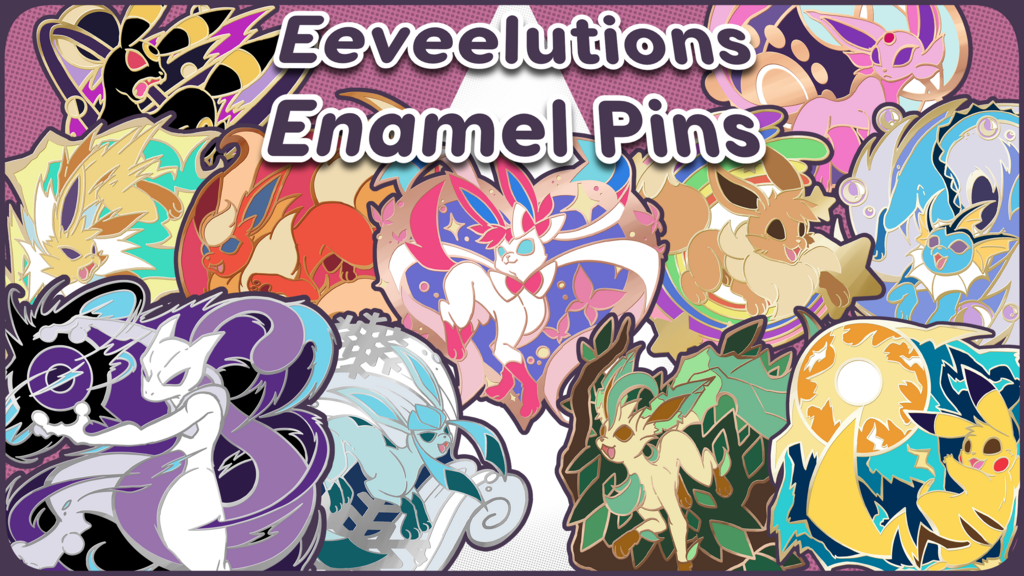 Missed out on the Kickstarter? Pre-Order now!

Latest Updates from Our Project:

Hey all, just wanted to make a final update before the Kickstarter ends! I also made a little video showing off all the pins :) However, I also did some math and looked at where we're at, and I think I'm going to lower some of the goals. I made them a bit higher to accommodate for more backers, but it looks like we've slowed down a lot, so I think it's okay to bring it down some. :) With that being said, Mewtwo is unlocked! I'm also adjusting the lanyards to be $17K and the Shinies to be $20K!

I also just wanted to mention, if there are any of you who get more pins than we initially unlock, I don't want you to worry about "wasting money" or needing to get duplicate pins or something. I think when all is said and done, I would like to try and get all these pins and the lanyards weather we unlock them or not, even if that means dipping into my own money to make it happen haha. We'll see how it works when we get there as I need to do some logistics about it, but I want everyone to back for as many you want without worrying about things like that!

p.s. you guys have been freakin amazing, thanks a ton~

IT'S OVER!!! Thank you guys so much for an amazing Kickstarter, our best one by far! We hit around $16.5K, just shy of the lanyard goal of $17K! That's actually insane, this is a new record for us by quite a bit haha.

Surveys will go out in the next few weeks as soon as Kickstarter processes all the money and all that, so be on the look out for that! I'll likely make a post about it as well.

I'm sure many of you are wondering what will happen with the Freebie Lanyards and the Shiny Eeveelution Pins, since we didn't hit their goals. I've decided that we were close enough to the lanyard goal to just unlock it anyways, so everyone will still be getting a freebie lanyard just for supporting the campaign!

As far as the Shinies go, we were a lot farther away from those haha. I would really like to get them, because I think they're cool, but it might have to be a bit different. I also feel bad for those who may have gotten 13 or more pins, wanting all individual pins but then we didn't unlock them all. So what I was thinking is the possibility of getting the shinies anyway, sort of out of my own pocket just because I want them, and having them be Etsy exclusive items. However as a thank you for those who pledged for 13 Pins or more, I will have them available for you on your surveys as well :) So you crazy amazing people who lead the charge and upped your pledge over and over every time a new pin was revealed, will get all the unique pins you were hoping to get!

Thank you all again so much for everything, I will likely see you all again around the beginning of next year for something fun and new! I'll be making updates here every once in awhile keeping you guys in the loop of the process! :)

Also please if anyone has any problems with surveys or if you need anything at all, please reach out to me either here, or my email braivety@gmail.com.

For more updates on Kickstarters, including my partner SpectroliteAAA's, our Etsy Shop's restocks and new arrivals, and anything else related to us, join our mailing list! We promise not to spam you :)

We now have our first Freebies items of the Kickstarter! Once we hit $20K, everyone who backed the Kickstarter will get one of the two Eeveelutions lanyards for FREE!

This is sort of a passive goal we can work towards while we fund smaller pin goals along the way, like for instance our next pin, the Bulbasaur Family! He's not ready to be shown yet, as you guys are funding all this at blinding speeds, but stay tuned! :D

For those who don't know, I normally make Pokemon pins of the certain evolutionary families, and we've already done Charizard's and Blastoise's, so I wanted to finish the trio and do Bulbasaur's family as well!

So officially all pins revealed are unlocked, including Pikachu! :D Please bear with me while I finish the Bulbasaur family and the next goals as they come, we are funding way faster than I thought was possible (thank you guys holy crap man) and I just need more time haha.

Also a quick reminder, for those who want to get one of every pin, every time I announce a new one I've been making a new reward tier you can bump your pledge up to, and even though they're called "Eeveelution Pins," everything on this project is considering an "Eeveelution Pin" to keep it simple. That includes things like Pikachu, Bulbasaur, and so on.

We have officially revealed all the Eeveelutions!!!

Wow I have never unlocked so many pins so fast in a Kickstarter haha, you guys seriously killed it! Sorry Sylveon took so long to put up, we funded WAY faster than I thought we would haha. But here they all are! Look at the good Eevee family :3

Everyone all the way up to Glaceon is unlocked as well, so the last Eevee that needs unlocking is Sylveon!

But don't worry, we're not even halfway through our Kickstarter 30 days! So we now have additional stretch goals in the works! Our first one is a very good friend of Eevee, Pikachu! I need some time to finish Pikachu, but he's on the way, and will be revealed with Sylveon's unlocking!

We still have so much more to do, and at the rate we're going, I think we could fund a lot more pins still! :D Thank you guys so much for making the initial goal of this Kickstarter possible, though! I couldn't have done it without all of ya'll!

First Update of the new Kickstarter, and holy crap we already funded the first 7 pins??? 6 of which were in the first 24 hours??? That's actually unbelievable haha, there are only 9 Eevee's guys! We're gonna run out of them in no time! Speaking of which though, it won't be over after Eevee's are done ;D.


With this Kickstarter going so well, and so fast, we're going to have extra stretch goals past the 9 Eevee's! I have some ideas already but let me know on here or Twitter or something if you have ideas! I might make a poll at some point we'll see.

Eevee through Leafeon are already unlocked so the next one to go is Glaceon!

We'll also be sure to get some freebies going at some point. Even though we've come so far, there's still so much to come!